I first started chatting to D.J. Kirkby on Twitter before I realised that she had a book under her belt and another one due for release. One word: CLICK! I can't vouch for her but it was quite powerful for me how mighty this click was. She's now up there in my list of firm favourites.

It was with great pleasure that I ordered both her memoir From Zaftig to Aspie (from Amazon) and her novel Without Alice (directly from Punked Books). They both arrived through my letterbox during the same week. I was really excited about reading them both but I had to wait until I had a couple of days away to be able to properly read and absorb them. 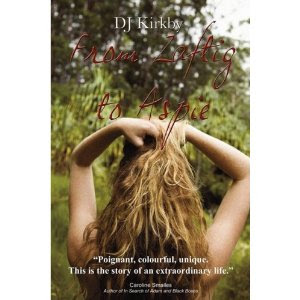 I chose to read From Zaftig to Aspie first. By this point I felt I knew D.J. Kirkby quite well but wanted to know her back story. She is the first to admit that she self published this memoir and that she has dyslexia. To me this enhanced the read, as I am full of admiration for the courage involved in this decision. If you bear in mind her dyslexia as you read it, you cannot fail to be impressed with this book.
The content is fascinating in itself. A story of a very colourful and full life, It is sometimes hard to imagine that one person can have had so many varied experiences. The writing is very intimate, and at times I felt like I was being a snoop and peeking in on D.J. Kirkby's private thoughts. This, in my opinion, makes From Zaftig to Aspie one of my favourite memoirs ever. I sat in a public place with big fat tears rolling down my cheeks at one point. I didn't even bother to brush them away. You will not be able to read this book without feeling emotional. 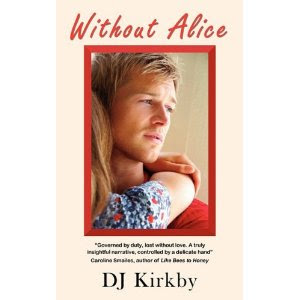 Five seconds after finishing From Zaftig to Aspie, I started Without Alice. I read it in under a day. The characters draw you in from the very start, and being as I always see the best in people until they prove me wrong, I did wonder what the deal was with Stephen at the beginning. He didn't 'feel' like the type that would be a complete bastard for the sake of it. I have so much empathy for Jennie, and for some of the secondary characters as the process of labour, birth and having a young baby was described, and my own memories came flooding back. The way the main characters are all involved is unravelled in what feels like a bit of a dance as they try and establish their own place in both their lives and in your mind. It truly is one of those books that you do not want to end. I put it down for a while when I had a few pages left, to try and savour the moment.
One thing I would like to mention about D.J. Kirkby is her wonderful eye for all things beautiful. You simply cannot fail to notice that the covers of both of her books are eye catching. I think this has hit a chord, as in some cases it seems that a cover can sell a book on it's own. You only have to look at the Facebook fan page for Without Alice to see that 'Stephen' (or rather the front cover model) has his own little fanclub.
An exclusive for you now: From chatting to D.J. Kirkby I became intrigued, and eventually asked why she chose to write as D.J.Kirkby. Curiosity led to my question - was it because she didn't like her name, wished to remain gender free, or for some other reason. The actual answer was one I would not have been able to anticipate at the time (pre reading From Zaftig to Aspie). The J is for her brother, Jia. So now you know too. But surely now you want to read the memoir now to find out the full story? I may be able to help you with that:
I have a copy of From Zaftig to Aspie and a copy of Without Alice to give away. If you would like to be included in this competition, please leave a pick me comment after this post and say whether you would like to read one in particular, or both.

You can follow D.J. Kirkby's blog here at Chez Aspie.
From Zaftig to Aspie Facebook page.
Posted by Rebecca Emin at 10:34