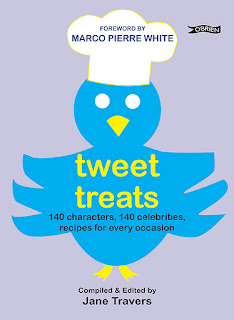 It is with great pleasure that I am playing host to the Tweet Treats blog tour today. This lovely little book is the perfect stocking filler, as it contains many quick and easy recipes from people all around the world, including 140 celebrities and is the perfect size to slip into a Christmas stocking.

I have a few recipes in the book myself, keep an eye out for mine when you get your copy!

Without further ado I would like to introduce you to the lovely Jane Travers. Without Jane, Tweet Treats wouldn't exist today.

Hello Jane and welcome to Ramblings of a Rusty Writer

For anyone who has not yet heard of Tweet Treats, could you briefly describe what it’s all about?

Thanks for having me, Rebecca! Tweet Treats is a project to collect 140 character recipes (140 characters is roughly 25 words) sourced through Twitter. I collected recipes from 140 celebrities as well as from ordinary people, compiled a book which has just been published by O’Brien Press, and I’m donating all the royalties to Médecins Sans Frontières.

They’re an amazing charity, and I have huge respect for them. They provide medical care in countries stricken by war, famine and natural disaster, quietly and without blowing their own trumpet. They are utterly non-partisan in their dealings with people, and are funded entirely by voluntary contributions so that they are not affiliated with any country, religious institution, etc. I received recipes from all over the world for Tweet Treats and I wanted to involve a truly global charity; MSF was the obvious choice.

You created the book via Twitter. So, for anyone who may be wondering, what exactly is Twitter?

Twitter is a social network – but everyone knows that. You might not know what it really means, though. The emphasis is on “social” – Twitter is about building a broad online community of people with similar interests, who come together and chat, joke, discuss and debate. The essential brevity of a tweet (140 characters) is, I think, what makes Twitter great; you have to hone down what you want to say to its bare bones and still make it interesting. It means that Twitter moves fast and stays sharp, as there is no room for waffle in 140 characters. It’s a great exercise for writers, actually, to be concise and clear about what they want to get across. I love it. (And yes, that passage was more than 140 characters – see what happens when I’m not on Twitter?)

Have you met any of the celebrities who have donated recipes? If so, what were they like?

I had to think about that for a minute! I feel like I’ve met so many people through chatting to them online, it can be hard to remember who I’ve actually met. I met Pat O’Mahony, an Irish celebrity – he actually agreed to launch the book for me, which was great fun! Pat is a good laugh and a huge lover of Twitter – he’s even made a documentary about it. I already know a number of the Irish writers who contributed, like Colette Caddle, Claire Hennessy, RF Long, etc. I’ll be meeting Neil Gaiman next month in Seattle and I’m crazy excited about that.

How many new recipes have you tried since creating Tweet Treats? Do you have a favourite?

Gosh, loads of them! I couldn’t give you a number. Last summer, when I was flat out collecting recipes, I tried a new Tweet Treats recipe almost every night. A few of them have become firm favourites, like Banana Nut Bread by @mduffywriter – I have to make large batches of that every time because it doesn’t last long in our house!

What were the highlights and lowlights of getting Tweet Treats together?

The whole thing was an enormous amount of fun, I’m happy to say! There were loads of little highlights along the way; getting the first celebrity (@Tracy_Chevalier, author of Girl With a Pearl Earring), getting a recipe from my personal hero @neilhimself (Neil Gaiman), and loads of other celebrities gave me a huge kick too! There was a low point in the middle of the whole thing, when I thought I was mad and would never bring the whole thing to fruition. I thought about giving up and that same day @PaulaAbdul tweeted me to ask how the whole project was going and when the book would be out. I thought, wow, if Paula Abdul can have an interest in this, then I’ve got to keep going. And I did. The highlights far outweighed the lowlights, I’m pleased to say!

Would you ever create another fund-raising book?

I’d love to. I love the sense of well-being and purpose that Tweet Treats has given me, and the fun I’ve had with it. However, the only things I’ve had published to date have all been for charity, so it’d be really nice to actually earn some money from writing for myself one of these days!

What would you say are the most positive things that have come from using Twitter for you as a writer?

The network of writers. There are a fantastic bunch of writers, agents, editors and publishers out there, chatting, joking, sharing advice and information, and occasionally having a good rant. Before I found Twitter I was sitting on my own in front of a computer screen, typing into the abyss; now I’m part of a wider community. Writing is a solitary business, but I’ve learned it doesn’t have to be a lonely one.

What are you working on at the moment?

I had been polishing off a novel (women’s fiction). I put it aside when I started working on Tweet Treats, but now I’m trying to finish it off and find it a home once and for all. I’m also working on a YA paranormal romance, which I’m hoping will be a trilogy.


Thank you for joining me here on Ramblings of a Rusty Writer.


If you like the sound of Tweet Treats, head over to Jonathan Pinnock's blog as he is currently hosting a giveaway of a copy of the book.


You can find further information via the following links:

You can also buy a copy of Tweet Treats via Amazon.co.uk
Or via Amazon.com
Posted by Rebecca Emin at 00:30 No comments:

Email ThisBlogThis!Share to TwitterShare to FacebookShare to Pinterest
Labels: Anthologies I am in, Author Interview, books, Twitter

Today I am guest blogging for the first time ever, thanks to the very lovely Sue who blogs at The Long and the Short of it.

In the post I talk about the importance of having a platform, speaking from my own experiences.

Please do pop by and visit.
Posted by Rebecca Emin at 10:13 1 comment:

I had one of "those days" on Thursday. You know, where you're tired, you don't get a minute's peace, you have a bazillion and five things you want to do and no way of achieving them at that precise moment. And to top it all, a sore spot in your guts where you've been kicked by a rejection.

Yes, it was one of those days. I was well and truly fed up. Downward spiralling and not sure how I would ever feel any better. And then I realised the story I had drafted for a magazine that I was really pleased with would never be submitted to that magazine as the publication I intended it for didn't accept work from new writers, I developed a migraine, and all three of my children had a complete meltdown in the middle of my favourite shop. I have never seen them all like that at the same time, it was horrible; shouting, shoving, yelling all at each other but ugh!

So I vented on my social networks. They say a platform is vital to a writer, but in this case it suddenly became my safety net. On Facebook and Twitter I got instant replies from people who either felt the same or offered words of encouragement. I instantly knew, that despite those niggling suspicions, I was not alone.

One of my Facebook friends, who is a fellow Ether Writer and also coincidentally I worked with back in the 1990s said on Facebook: "Some days you're the pigeon, some days you're the statue. This is a statue day." I have never heard this one before and it made me laugh so much. Just the thing.

Since Thursday I decided to cut down my to do list in any way I could. I have removed myself from several online sites which I never used properly but had emails from all the time (LinkedIn, to name but one). I have done a lot of thinking about the next step for my second book and then in a completely coincidental fashion a good friend and fabulous writer sent me a very encouraging email. I was almost there by myself but her words tipped me into the "I will not give up" zone.

I dragged my husband out of the house on Friday and we had lunch outside a restaurant; good food, gorgeous weather and a fantastic bit of city people-watching where I gained a few character ideas.

Then I sorted something out that I hadn't even realised was bugging me. I polished some first drafts that I had sitting around on my desktop for weeks and sent them off to their various places. And I allowed myself a bit more chat time on Twitter.

It's funny as I feel like a different person today but I wanted to write all this down so next time I have the black clouds hanging over my head I can maybe come back and read this and get back to how I feel today more quickly.


I went out for a lovely family meal last night and during the conversation I discovered my Dad has read my book. I actually didn't think he would ever read it, so I am floating on clouds today.


So the worst kind of day to the best in only three days. That can't be bad. 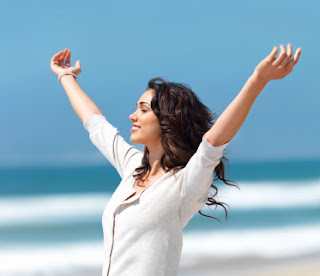