Yesterday evening I went to the Eight Cuts Flash Slam, an event in Oxford at the Albion Beatnik bookshop, which took place as part of National Flash Fiction Day.

It started at 6.30pm and by the time my husband got home and I left, I was running late. was walking as fast as I could to get there, but arrived at about 6.45 and entered the bookshop while Dan Holloway was doing his introduction. Dan promptly greeted me by name (thank you, Dan, that made me feel instantly at home) and asked if I would be a third judge.  Not quite the stern looks and tutting that I was expecting from exploding in on an event at such an hour!

It was so nice to look around the room and spot familiar faces from Twitter and Facebook. It was even more amazing to hear some of the people I have spoken to for months or years get up and read stories. Had I not been in 'rabbit in the headlights' mode, I probably should have said I couldn't judge as I knew a few of the writers (online), but I resolved to give marks on how the stories impacted on me on the evening. The standard was astonishing, and I thought every writer/reader was incredibly brave to get up and read.

By pure chance, I was seated next to the incredibly lovely Tania Hershman who commented on all the stories, and read some work of her own as well. I came away with a signed copy of her new book, My Mother was an Upright Piano, which I am very much looking forward to read, especially after hearing some of the stories from it. I think you will agree it looks absolutely gorgeous. 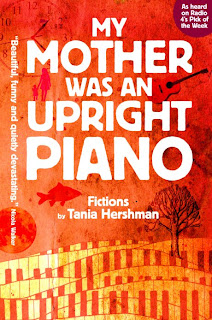 Afterwards it was lovely to chat with people I have previously only Tweeted, and meet some new people too.

As for the venue, the Albion Beatnik is a gorgeous bookshop, with an enormous amount of character - and they also serve tea and coffee. Not just your builders tea, mind; I had Earl Grey from a pot with a tiny strainer and then was told to chose my own mug or cup from the shelves. How lovely is that? How many times have you had a cuppa and wished the cup or mug was different? I will definitely be going back to this bookshop for a proper browse before too long.  And the bar a few doors down was nice too.

I have to say I enjoyed this night so much, I really hope there will be another one before too long. (No pressure, Dan!)