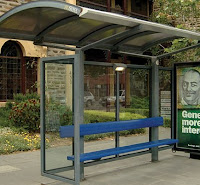 “Where are you going to?” a voice asks.
“Oh, just the city centre,” I say, as vaguely as possible, instinctively drawing my handbag further onto my lap as I wriggle back on the seat at the bus stop.
“You just missed your bus,” the stranger continues. “The next one’s due in thirteen minutes.”
“Hmm,” I say, gazing ahead.  I just want to sit and enjoy the warmth of the setting sun, but now I’m wishing I’d driven and not risked getting mugged… or worse.
“Did you know you can get the 31 into the centre?” he asks.
I glance at him now. “No I didn’t,” I say.
“Where are you headed?” I ask, simply because it seems rude not to.
He mentions a town a few miles away. The number 31 bus.

I get my mobile phone out of my bag. The basic, cheap one that’ll tell any potential thief I’m not worth mugging. I pretend to send a text.
He mirrors my behaviour, reaching into his pocket to get his Blackberry out.
“I’ve been trying to get hold of my other half all day,” he says. “I can’t contact her.”
“Maybe she’s gone out?” I say, looking at him properly for the first time. His chin is covered in soft down. I realise he can’t be more than fourteen.
“But it’s weird though, I’ve been trying to contact her on Facebook and she hasn’t responded,” he says.
“She’s probably had a busy day, you know. Gone out without her phone or something,” I suggest, wondering if this boy-man is being dumped for the first time but doesn’t yet know it.
I want him to talk more now, to find out more; work it out.

“Oh look, that’s me,” he says. “See ya,” he yells over his shoulder, and he bounds over to the approaching bus enthusiastically.
“’Bye!” I yell at his back.
I hope she’s just been busy.
I guess I’ll never know.
Posted by Rebecca Emin at 07:08