On Saturday, I went to the King's Head Theatre in Islington to see The Upstairs Room. The venue is a small theatre at the back of a pub, and perfect for this play. The set and lighting design worked beautifully, giving the impression that you were seated in a messy attic room right from the start.

This show has a cast of just four actors, the role of Gordon played to perfection by Anthony Cozens, just as it was when the show ran in Oxford. The rest of the cast were captivating with Liza Callinicos adding glamour as Stella, and Bret Jones adding a hint of mystery as he played the Manager in a quirky and amusing way. Lucy Wray (Iris) gave a refreshing injection of energetic humour to the latter part of the show, just when it was needed in fact.

Having seen The Upstairs Room twice now, I can say the London show was much improved on the version I saw in Oxford but it was great to see how it has developed and what a fresh set, and clearly loads of work, can do for a play.

I don't know if it's just me but I do find the play itself quite weird, it's certainly not for theatre-goers that like an easy show to wash over them and a lot of glitz and glamour. However it is thought-provoking and the next morning I realised something that I hadn't during the show, which is always a good thing.

And at the end of the show I was introduced to the leading actor, Anthony Cozens, which was a highlight, it has to be said. Lucky me!

Star rating:  3.5 out of 5 stars but catch it while you can because the actors and set are five star.

The Upstairs Room is showing until 8th December 2012.
The programme includes the entire script for the play, and are sold in the theatre and on Amazon.


In the interests of full disclosure: I went to see this play because the director is a friend of mine. However, no bias was used during the writing of this review.
Posted by Rebecca Emin at 22:03 1 comment:

Flash Fiction: You Light Up The Sky 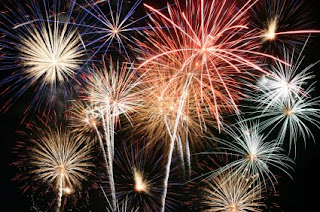 YOU LIGHT UP THE SKY

Sometimes I sit and think of you, my periodic visitor; my temporary blinding light.

The anticipation of your visit is reminiscent of lighting the blue touch paper of a firework, then moving back to wait, wondering if anything will happen.

As the bell rings, the flame has caught. A whoosh inside me as I open the door and see your eyes dancing with mine from under your thick brown fringe.

I put the kettle on. We talk, and all around me I see stars. Your nearness evokes a spinning sensation in my head, like a Catherine wheel, whirring out of control.

Those micro-seconds when you hold me, the world lights up around me in a blast of starlight; momentarily beautiful.

But then you leave.

Darkness. Chilling air and a sense of loss.

The moment is over. It was never mine to begin with.

This flash story is taken from my collection A Knowing Look and Other Stories. 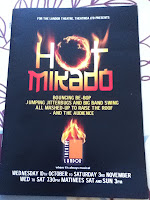 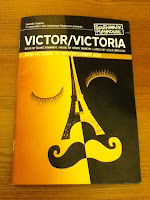 Yesterday I went to the matinee performance of Victor/Victoria at the Southwark Playhouse. My first impressions of the venue - well it's amazing! If a friend of mine hadn't known about it I'd never have found the place and it really is an interesting venue to see a show, basically in a converted tunnel/vault, but you can still see all the brickwork so it's an amazing space.

This show on first impressions feels like a romp through the world of sequined cabaret shows in gay Paris, and actually that is what it is but once you dig deeper and see the message of how a woman had to pretend to be a man in drag to be able to perform in certain places, it becomes a stronger plot, with the songs If I Were A Man and Almost a Love Song proving particularly poignant.

The soundtrack was catchy, and performed wonderfully, especially by Anna Francolini in the role of Victoria. The choreography was incredible given the small space the actors had to dance in, it felt like they were on a much larger stage and every member of the cast had a great stage presence (and I have to be honest there was a ridulous amount of gorgeousness in the cast).

For me though, the star of the show was Richard Dempsey as Toddy who played the role to perfection; camp, sympathetic and humorous, and the man has legs that a female supermodel would kill for. He's definitely one to watch.


Star rating: 4 out of 5 stars.  Will brighten up the dreariest autumn day.

Today is the first ever Mindful Writing Day which is taking place online. Writers all over the world are paying attention to detail and writing a "Small Stone", and some are submitting it to the blog where this all started, Writing Our Way Home.

To celebrate Mindful Writing Day, A Blackbird Sings is free today for Kindle. One of my own small stones is included in this collection. If you enjoy poetry or micro stories, you will most likely enjoy this book. 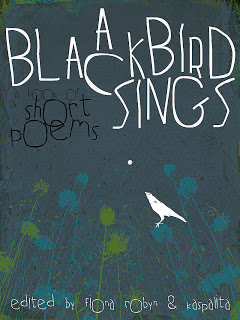 Email ThisBlogThis!Share to TwitterShare to FacebookShare to Pinterest
Labels: Anthologies I am in, poetry
Newer Posts Older Posts Home
Subscribe to: Posts (Atom)