Book Review: A Family At War by Beryl Kingston 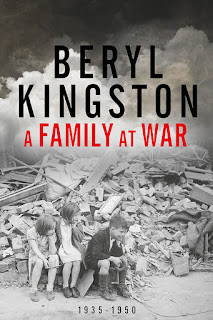 I have, for as long as I can remember, been fascinated by non fiction about World War 2 and also about dysfunctional people such as criminals and abusers. I partly blame this on dipping in to my Dad's library of books which got me hooked, and partly on life experiences (such as a temp job working in child protection) and wondering how people tick.

By total chance I was put in contact with Beryl Kingston by my friend Pete Domican when she put a shout out on Twitter for someone who could format a book for Kindle.  As I opened up the file I rather quickly became aware it wasn't a novel and what the subject matter was so as soon as I had finished the book I bought my own copy and read it properly.

This is a book which is fascinating because it is based in London during the Blitz. Seeing the war through the eyes of a child brought it to life for me. But it wasn't only the war outside Beryl had to deal with every day of her young life, it was the abuse and pain inflicted on her (and the family pets) by her own mother that has even more of an impact.

This is not a book that has been written to gain sympathy or deliberately to shock the reader (although shock it does). It is a book that has been written by an amazing woman and author who has had an extraordinary life and survived ordeals that most of us will never even come close to, and decided to share. I feel privileged to have been one of the first people to read this book and I strongly urge anyone who finds these subjects remotely interesting to read it as well.

Posted by Rebecca Emin at 09:33 No comments: