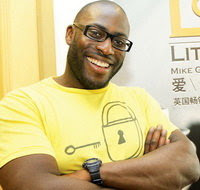 Early in 2007, I discovered the author Mike Gayle. I can't recall how I first got hold of his books, but knowing me, it was during a tired stroll around a book shop, browsing for books that I may be able to read, in small doses, in between sorting the kids out.

I flew through 'Mr Commitment' and followed it with 'Dinner for Two' before I had time to catch my breath.

By a complete coincidence, which I only realised when I went back to look at the message as I started this post, it was exactly three years ago to this date that I wrote an e-mail to Mike Gayle via his author site. I think that was the first time I had ever searched for an author on the internet and bothered to send an e-mail. I'm one of those people that likes to say thank you when I enjoy something; hotels, customer service, meals, you name it. As far as I was concerned, I sent it off and that was that.

Three days later, I had a reply. I was really surprised by that. I've since bought every book that he has written, and if you found me via Twitter you'll know I am currently reading 'The To Do List'. This has been on my shelf since I received my pre-ordered copy. I've only just felt able to start reading it, as if there is one thing I hate, it's finishing a much loved book by an author who does not have another one due out any time soon. I felt ok about reading it now, as there's a new one out in May.

I sat in a kids playcentre this morning as, having dipped in already, I just *had* to read some more. Youngest kept himself amused for some of the time at least, and I managed to read a lot more than I would have done at home.

Even though 'The To Do List' is a non-fiction book, it is still in the same writing style that I discovered in the novels. I find it very easy to read, as well as honest and down to earth. I love books like that.

If I had to write a list of people who have inspired me to write, Mike Gayle would definitely be on it. He has a young family, but manages to write novels and still find the time to respond to people who contact him.

Now that is the kind of writer that I aspire to be. 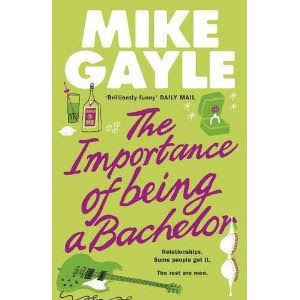 'The Importance of Being A Bachelor' is due for release later this year.

Photographs included with permission. Thank you MG!
Posted by Rebecca Emin at 17:46