A year ago, I hadn't heard of Twitter. Then one day my husband came home, announcing that he had discovered this site which would be a great way for us to keep in touch when he had to stay away for work. I resisted for a day or two, but then signed up. By the time a month had passed, hubby had lost interest completely, but I had realised that my online life would never be the same again.

The thing that got me well and truly hooked on Twitter, was the realisation that there were authors on there. Published authors, as well as journalists, publishers, and people who enjoyed writing short stories. It took some nerve to add some of them, and I quickly realised that many of them are really friendly. It took half a second longer than that for me to get completely into the idea of finding more like minded people to discuss writing and other similar interests with.

I read in an article recently, that if you want to be an author, you should have a good web presence. There must be a lot of truth in that, as some of the books on my shelf I would never have discovered if it hadn't been for interacting with authors on Twitter.

One of the earliest people I added on Twitter was Keris Stainton who has recently had her debut novel 'Della Says: OMG!' published. Reading this book made me feel like I was 14 again! It was such good fun to read, but more than that it was even more exciting to read it because I had followed a lot of the process through to publication via Keris's tweets.

Catherine Ryan Howard is another lovely lady who has recently published a book. The timing was perfect as I had just c 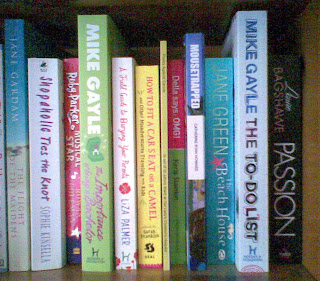 ome back from Disneyland Paris and had a head full of All Things Disney. 'Mousetrapped' is a great read, which I really did not want to put down. I managed to read it in under 3 days which was during a time when I had all 3 children at home as well as house guests. *That's* how good it is! Plus, if you buy it directly from the 'Mousetrapped' website, you can have it signed by request.

'Poetry Against Cancer' is a project that I had bookmarked to write something for, but didn't quite get around to. (I have a house move to blame for that!) However I bought my copy and found poems in it written by several people who I follow on Twitter, including the lovely Alison Wells.

Last, but definitely not least, a shining star that I discovered on Twitter, Sarah Franklin. It took a while for me to discover that she was the Editor and one of the contributors for a book. I immediately bought a copy of How to Fit a Car Seat on a Camel... as I wanted to see how this person, who I felt I really connected with, actually wrote.

Obviously, there are other books on my shelves from authors who use Twitter that I had already heard of in my pre-Twitter days, but I just wanted to say, if you want to spread the word about something, Twitter is the place to do it. And that doesn't just go for books!
Posted by Rebecca Emin at 15:04