Parenting: The Highs, The Lows, The Exhaustion and The Guilt

When my husband and I discussed the options for us and our family when we were expecting Eldest, we both felt lucky that we could actually chose, and that I could stay at home with our children when they were small. We talked about it from the point of view of what we considered was right for our child.

During my pregnancy, the company that I worked for announced that it was closing, and that everyone would be made redundant that December. The baby was due in September. My role at the company was to be entirely responsible for purchasing, payroll, and office management. My boss was The Best Boss Ever. I loved that job, as it was the only job I had where I felt fully appreciated and valued. In all honesty, it was an eye opener after the previous job that I had, in publishing (think Bridget Jones, but without the pleasure of Hugh (or Colin)). I left on Maternity Leave in June, and carried on processing the payroll (and receiving a bonus) until the company closed.

As soon as I was on maternity leave I knew I needed something to focus on. I started to trawl charity shops to buy things, and resell them on EBay for a profit. It felt good to be supporting charities and making some money at the same time. Especially when one video (yes, video) I bought for 50p, sold for £42. Sale of the decade! Some months I would make £400 clear profit. I had the sense of achievement that I need, with that. 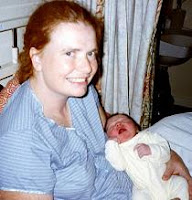 Baby arrived, and I became 'Mummy'. It was a straightforward pregnancy and I was lucky to have a water birth. In fact this happened three times for us. I am eternally grateful for this, and to my Midwife who is an absolute superstar. I was determined to avoid drugs. Water soothes me, and gas and air was enough to make me imagine conspiracy theories so I only had a few drags of that. In my mind, I didn't want any drugs because the baby was the one that counted. I'd take the pain.

With hindsight, I wish I had realised that being a martyr at all times is not a good thing. When, a couple of months later, my health visitor asked me to fill in the survey about Post Natal Depression, I put on my cheery smile and said I didn't need to do that, I was alright. She agreed. The reality was I didn't want tablets as I was breastfeeding. I didn't want to admit that some days I sat there and wished that someone, anyone, would take the baby away and just let me sleep. I didn't want to go out or see anyone. I felt like the worst mother in the world. If I had filled in that form, I knew I would have had a prescription in my hand before I could get out of that room. I didn't want my little one having traces of that to drink. So again, baby came first. Unfortunately I am so good at covering up my feelings that no-one was aware of how I was feeling. Just me. (Luckily this sense of utter hopelessness cleared up before Eldest was a year old, and I have not felt as low since.)

Here I am now, typing this all out to assuage my guilt. I still have days when I wish I could have some peace and some sleep. It is now nearly eight years later and I have had very few days in the past eight years where I have felt fully rested. It has taken it's toll on me physically, as I have comfort eaten myself up to a size 16, developed IBS, and seen an increase in severity and frequency of attacks of migraine and psoriasis. Basically, I was in a bit of a state.

It's only recently that I have grasped firmly onto a lifeline and dragged myself up from feeling constantly unfulfilled and vaguely pissed off. I feel guilty even typing that, as my children are everything to me. But I have finally realised that being a Mother and being an individual are a different part of the same person. It all started when my husband was between contracts, and I got a temping job. I *loved* this job as my brain was being challenged again, and people would actually *thank* me for doing what I did. This was a revelation. I ended up staying in this role for four months and they wanted me to stay on permanently, but once my husband got a contract again, we reversed rolls and I was, once again, at home full time. It was shortly after this that I discovered Twitter. I've gushed all about this in an earlier post, but I don't think I would be typing this if it wasn't for Twitter, as I didn't have a blog until a few months after that. I also wasn't writing much at that stage either.

I still have days when I wish that someone would wave a magic wand and let me have more time to achieve something useful. I don't write as much as I want to, as I usually have a small child at home with me (or two, or three). But I have made some unbelievable contacts, many of which I consider friends even though we have yet to meet. I've also been offered some incredible encouragement for my writing, via comments on my blog (and on Facebook and Twitter). I will be eternally grateful for that.

I have finally given in to the fact that I am not actually designed for full time childcare. Someone asked me outside the school recently, what I would do when Youngest started school. She suggested that I could be a TA. I was incredulous. I must hide my true feelings really well, as to be honest, I could not see myself in that sort of role at all. Not even in my wildest nightmares.

I have also recently accepted the fact that I have to look after myself if I want to have any chance of being there for my children in a healthy and positive way. Hence the stubborn determination to lose weight and get fit that several people have commented on recently. It's making me feel so much better. The thing I still struggle with is getting enough sleep. It's a lack of sleep that leads to me getting my three-day migraines. I am also so much less productive when I am not rested, and that is 90% of the time right now. It is also the one thing that I can't really do much about as it is the other members of my family who are responsible for it. I am learning though, and am getting better at going to bed earlier in the evening. Most of the time!

I still think it's best for my children to have me with them when they are at home. Whether it's the best thing for me is debatable, but now that they are all getting a little older I can see that there is going to come a time when I can develop what I have started, and devote more time to my writing. I long for that time, but at the same time I don't want my children to grow up either. I'm so torn, in so many ways.
Posted by Rebecca Emin at 11:33