Friday Flash: The Night Before Christmas

It was the night before Christmas, and Rosie had planned, shopped, wrapped, dreamt of a white Christmas and eaten mince pies whilst carol singing around the tree in the town.
Rosie’s two children were young enough to keep the magic alive, but too old to be fooled that it was not in fact Christmas Eve. As a result, due to one too many festive beverages, Rosie’s husband was already fast asleep whilst the children were still fidgeting, fighting sleep and sneaking peaks from under their duvets.
Rosie was aching with tiredness by the time she decided to have a long hot bubble bath. Afterwards, feeling relaxed and even more sleepy, she pulled on a brand new, long white nightdress, pushed her feet into her fluffy slippers, and did a final tour of the house.
It was one o’clock in the morning and finally the children were sleeping peacefully. A quick glance at her husband showed that he was well into his slumber. The sight of his mouth slightly parted as the sound of snoring filled the air made her grateful that they had a spare room. By ill-timed coincidence, he let out a fart, after which his lips curved in a grimace of a smile. Rosie left the room without a backward glance, to go back downstairs and finish her jobs.
Fifteen minutes later, with everything in place, Rosie crept back up to the spare room. Slipping in between crisp white sheets, she smiled to herself as she looked forward to her favourite morning of the year.
As the first tendrils of dawn inched their way over the horizon, Rosie awoke with a shiver. She saw the room was bathed in an eerie light, which could only mean it had snowed during the night. In her half-awake state, she glanced towards the window, when on the other side of her room there was a glittery shimmer and a flash of red.
“Rosie, as always, you have proved yourself as one of my most perfect helpers,” a smooth voice said.
Rosie turned towards the voice, and there he was. “You did come to see me again,” she said with a smile.
“I had a few minutes before dawn. I wanted to thank you, as always, for your hard work.”
With that, he walked towards her, bent over the bed and planted a gentle but firm kiss on her lips.
“Happy Christmas Rosie,” he said.
By the time that Rosie was fully awake, she was smiling at the thought of the day ahead. She lay in bed for a few peaceful moments, wondering if the children would notice the magic dust near the wall when they came running in to wish her a happy Christmas. 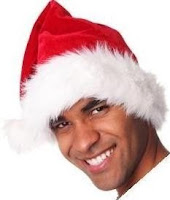 Have a wonderful Christmas!
Posted by Rebecca Emin at 08:07 7 comments:

One Amazing Year for A Rusty Writer!

But it has happened. I'm still ridiculously excited every time I look at a front cover of either of the books or the Ether website.

I thought I would get a couple of copies of each of the anthologies. One for my parents, one for my sister and one for us. Wrong.

So far, I have had to buy 34 copies of 50 Stories of Pakistan and 41 copies of Shambelurkling and Other Stories. Insane, I know!

I have had press releases published, made up marketing freebies, got them stocked in two Post Offices, and have a school visit pending. Even with all of these things, the thought of going into a proper book shop scared the life out of me. Somehow it seems a bit like The Big One.

I will admit this now. I went into the shop I had in mind once, a couple of weeks ago. I bottled it, and left with my question unasked. Today I decided to confront my nerves. I printed off a letter and packaged up one of each of the books in the vain hope that the manager wouldn't be there. But she was.

When I introduced myself and showed her the books, there was no hesitation. She didn't even open them to look inside.
"We'll take two copies of each to start with, please send me an invoice." I inhaled deeply and tried to hide my excitement. The fact that she said "I recognise that cover, someone who knows you was in here asking about this one ('50 Stories') made it an even more special trip.

I floated out of that shop.

Links to both anthologies and the Ether website are in the right panel of this page.
Posted by Rebecca Emin at 17:30 7 comments:

It’s my favourite journey of the year. I travel down the motorway singing along to Christmas Carols that are playing on the radio, and anticipate going through the front door of my family home and seeing the whole family gathered together again.
The car is packed full of gifts and food and my suitcase, as I’m staying for a few days as I always do. I look forward to the sight and smells of a log fire glowing in the hearth, and my family gathered around it. I hope that this year, Uncle Bernard will keep his fierce opinions to himself. I involuntarily raise my eyebrows as I think of him and the arguments that he has caused.
Suddenly out of the corner of my eye, I see a flash of white. Before I know what is happening, my car is struck from the side, and propelled forward. It ends up in front of the lorry that hit it, being pushed along sideways. I can no longer hear the radio. All I can hear is the sound of a blood-curdling scream that goes on and on. It takes me a few seconds to realise that the sound is coming from within me.
As the sideways motion continues, images fly through my mind. A table set for Christmas dinner with all of my family seated and a space where my seat should have been. A baby seat in the back of my car: not the current car but an unknown car from a future that may never happen. My boyfriends face.
I cling to the steering wheel as a drowning man would cling to a life raft. Everything feels like it is happening in slow motion.
Finally the movement stops. It takes me a while to realise that I am going to be ok, and as the car remains motionless facing the edge of the motorway, it is as if silence has descended on the world. Then reality hits me as I see the traffic racing past me and my ears start working again. I have to get off the road.
The lorry driver helps to push my car onto the hard shoulder. He apologises, in broken English, for not seeing my car. The police arrive and take down our details and I then get back into the car and drive slowly home. Later the car will be declared a write-off, yet I am completely unharmed apart from shock.
After everyone has heard all the details at least once, and stopped flapping around me, I sit by the roaring fire, warming my hands on a mug of hot chocolate. I listen to Uncle Bernard giving the room his opinion on the latest news bulletin, and smile. As I gaze at my family one by one, absorbing the details of their faces in a completely new way, I know that for me, this will be the best Christmas ever.
Posted by Rebecca Emin at 22:25 21 comments:

'Shambelurkling and Other Stories': An Ideal Christmas Gift.

Shambelurkling and Other Stories is a delightful book, full of poems and stories for 8-12 year olds.

It has been published in aid of a charity, I have two stories in it and many of my friends from Twitter are in it. But thats not the point of this post...

Do you know an 8-12 year old who likes reading? If you do, I am giving away a copy of Shambelurkling and Other Stories. All you have to do to be in with a chance of winning is write a comment below explaining why your nominated person would enjoy this book.

The book will be sent directly to your nominated child first class on 20th December so will arrive in time for Christmas. I will also include a magnet which shows the cover of the book will wrap it up as well. 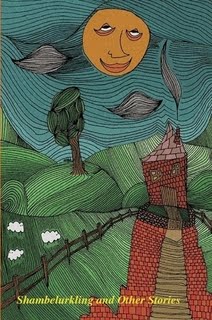 Rules
1. UK addresses only, sorry.
2. Competition closes at 6pm (UK time) on Sunday 19th December.
3. The quantity of books given away will depend on the amount of entries.

If you can't wait to get your hands on a copy of the book, please click on the picture of it on the right of my blog, and it will take you to the page where you can buy a copy directly.
Posted by Rebecca Emin at 10:53 2 comments:

Email ThisBlogThis!Share to TwitterShare to FacebookShare to Pinterest
Labels: books

You would stand at the end of the playground, poised and graceful in your long brown coat.
“How are you?” one of us would ask.
“Fine thanks, how are you?”
“Fine thanks.”
But you were never fine, were you?
I’d see you often. We’d greet each other the same way each time.
I hoped that one day we would have time to move on from “fine.” That I’d get to know the person behind the friendly smile.
I had no idea that you were battling a demon.
You would always offer a smile; an illusion in a long brown coat.
But now you're gone.
Posted by Rebecca Emin at 06:48 32 comments:

They call me Robin but my real name is Project 247.
Every year Santa tells the children that he’s watching them all the time. But everyone knows that he can’t do that on his own. He has helpers.
Throughout the year I keep an eye on them all. Some of them think I’m tame and that I go close to them and look straight at them to be friendly. In reality it’s so that the video and sound links can be sent back to headquarters.
They feed me scraps, they take my photo, and some of them even say I am their favourite bird.
If only they knew.

The Hating Game by Talli Roland 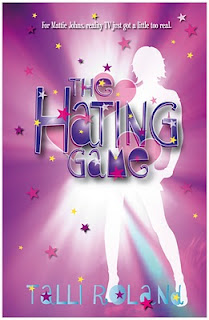 It was shortly after I met Talli Roland at a book launch that I saw her call for help with this Web Splash. I signed up immediately, so without further ado here are the details:
Help Talli Roland's debut novel THE HATING GAME hit the Kindle bestseller list at Amazon.com and Amazon.co.uk by spreading the word today. Even a few sales in a short period of time on Amazon helps push the book up the rankings, making it more visible to other readers.
Amazon.co.uk: http://amzn.to/hNBkJk
Amazon.com: http://amzn.to/hX2ieD
No Kindle? Download a free app at Amazon for Mac, iPhone, PC, Android and more.
Coming soon in paperback.  Keep up with the latest at www.talliroland.com.
About THE HATING GAME:
When man-eater Mattie Johns agrees to star on a dating game show to save her ailing recruitment business, she's confident she'll sail through to the end without letting down the perma-guard she's perfected from years of her love 'em and leave 'em dating strategy. After all, what can go wrong with dating a few losers and hanging out long enough to pick up a juicy £2000,000 prize? Plenty, Mattie discovers, when it's revealed that the contestants are four of her very unhappy exes. Can Mattie confront her past to get the prize money she so desperately needs, or will her exes finally wreak their long-awaited revenge? And what about the ambitious TV producer whose career depends on stopping her from making it to the end?
Posted by Rebecca Emin at 07:24 2 comments: