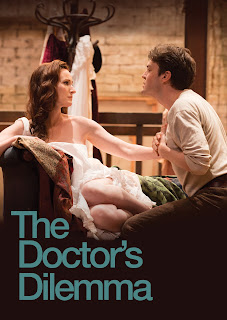 On arrival at The National and entering the Lyttelton Theatre, I was pleased to see that all seats offered a good view. My seat was in row S of the stalls and I could see perfectly clearly from there.

The opening scene was in a doctor's office and the play starts with humour in the shape of Emmy (Maggie McCarthy) the doctor's housekeeper who was my favourite secondary character.

The dilemma as implied in the title of The Doctor's Dilemma by Bernard Shaw is whether Sir Colenso Ridgeon (Aden Gillett) should use his new discovery of a treatment of consumption to treat an honourable doctor, or a talented younger artist. Quite a dilemma indeed, without the added factor of the artist's beautiful wife who all of the older/elderly doctors seemed to take a shine to in a comical yet perfectly typical fashion.

The four main doctor characters were brilliant together and they played the comedy in the situation with effect. My favourite of the four was Robert Portal whose character Mr Cutler Walpole was obsessed with surgery being the way to cure people of 'blood poisoning' and provided many laughs.

I found the set incredibly surprising as I had wrongly assumed the set as it was on opening would remain for the whole play.  I was very impressed with it, but my favourite location was the artist's studio where the action began in the second half.

Although I enjoyed the first half, I felt the second half was superior. The chemistry between the artist Louse Debedat (Tom Burke) and his wife (Genevieve O'Reilly) was fabulous, and they switched between comedy, heated discussion and heartbreak with effortless skill. There was also a lot of passion between them, in a very subtle way, but you could not fail to notice it.

I don't want to give any of the plot away but I thoroughly enjoyed this show, I thought the cast were incredible, the set amazing and I would recommend it to anyone who enjoys intelligent comedy.

The only thing about the theatre was the seat left me with a numb backside by the end of the show (run time 2 hours 40 minutes including interval) and the typical lack of adequate toilet facilities for the ladies. But theatre wouldn't be the same without a queue for the ladies, would it?


Find out more at the official website, which includes a great teaser video.

In the interests of full disclosure: I was invited to watch The Doctor's Dilemma in exchange for an honest review of the show.
Posted by Rebecca Emin at 21:42