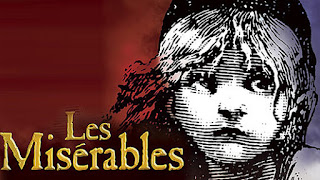 On Saturday 21st July I went to the evening show of Les Misérables at Queen's Theatre in London. This was the third time I've seen this show, and the first time I've seen it since it moved from The Palace Theatre to Queen's in 2004.

I have to say of the three times I have watched Les Misérables, this was my favourite. The cast were amazing, with particularly outstanding vocal performances by Tam Mutu as Javert and Danielle Hope as Eponine.  Sierra Boggess played Fantine beautifully and broke my heart at least three times.

There is a great mixture of drama, humour, romance and action in this show. In fact it's non stop action with the revolving stage ensuring that the cast never stop moving as they go from one scene to the next seemingly effortlessly.

I had bought "restricted view" tickets which were in the front row. I would highly recommend these seats for anyone over the height of 5 foot 7ish because they were amazing seats. Especially when the cast were on the edge of the stage bellowing at us and almost close enough to touch. The only restriction would be for a shorter person who would not have seen all of the action near the floor.

Find out more on the official Les Mis website