This story features some of my favourite characters (of my own) of all time, from my short story A Rocky Road, which is published by Ether Books.

It was one day in Spring when, by some miracle, the children were playing harmoniously. She sat on the park bench and smiled to herself, wondering where he was, what he was doing, if he was with someone.

Of course he’s with someone she chastised herself. A man like that would never be lonely.

She watched the roundabout spin, fighting the urge to rush and grab the rail to slow it down. They have to learn by their mistakes. And as that thought crossed her synapses, Thomas slipped and fell, his cries piercing her to the core. She ran and almost tripped; steadying herself as she neared her goal.

“Come on, Thomas, you’ll be okay,” she soothed, kissing his palm. And magically that kiss healed everything. He leapt back on the equipment before she’d finished wiping the snotty tears from his face.

Returning slowly to the bench, she wished her own mother could be there to kiss her heart and heal it that way. She thought of him again, probably on the other side of the planet, playing arenas. And there she was; a single parent of two, her husband in Barbados with his new girlfriend; his former secretary, even though he’d always maintained he was never one for cliché.

She closed her eyes and began to hum a guitar riff… the one she’d heard as she stared at him that night as he owned the stage. Five years had passed yet it felt like seconds. She opened her eyes, took out her purse and removed a scrap of paper, so worn it felt like material.

Don’t be stupid, he’d have changed his phone number by now, she thought angrily. She tucked that piece of paper back inside her wallet as if it was a baby scan image.

“Thomas! Natalie! Time for hot chocolate!” she yelled, and as her children squealed in delight she gathered them up in her arms, span them around, and then placed them back on the grass. Grabbing each of them by a hand, she led them in the direction of the café.

It gives me great pleasure today to host a lovely writer, Mariam Kobras, as she celebrates the launch of her book, Under The Same Sun.  So without further ado, I will hand over to Mariam.


The Last Thing On My Mind

What was that again?

Don’t ever fall into the trap of thinking that all an author does is write books and then sits back and watches the money roll in!

So this is how it goes. I’m sitting here, trying to think of original, witty and moderately intelligent things to say about Under the Same Sun, and in pops the publisher.
“You can’t use that title for the book you’re just writing,” they say.
What?
I try to come out of the muddle I’m in, caught somewhere between the launch, the blog hop, and the writing of a new book.
“You can’t use Lavender Lemonade. It’s a bit  misleading. You’ll need to think of something else!”
Right. Like I’m sitting here at my desk, and brilliant titles just pop out of my head like soap  bubbles. Like I need a new distraction right now.
La di da! A new title, and pronto, since I’ve been blasting the fact that I’m working on something new all over the internet.
I’m for something with “winter” in it, but my favorite beta-reader tells me no, everything with “winter” in it sounds like the title of a decorating magazine.
Gosh, I really don’t need this right now. How to come up with a new title?

I tell them that I can’t wait that long. I’m too old for that kind of planning, and I really wanted to make enough money from the writing to be able to get in and out of the Porsche I want to buy with my royalties. After having renovated and redecorated the house, taken the family on a trip around the world and having hiring a housekeeper. 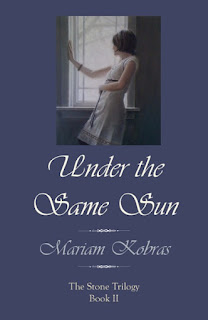 Oh wait—didn’t I say I wanted to move? Right. So after having tossed all the old crap out of this place and finding a pretty house with a porch somewhere in New England. Right.
Surprisingly, they don’t break out into hysterical laughter at this argument of mine. They just shake their head with an amused smirk on their face and say, we’ll see.

Seconds later, someone asks me to summarize Under the Same Sun in one tweet.
OY!
I don’t think so.

Authors are really lousy at summarizing their own books, I think. What to pick, what’s important, what’s  not?

I mean, I could go on and on about that lovely part of Under the Same Sun where Jon and Naomi go to Italy to meet Naomi’s maternal family.
It’s late summer, the heat has abated, and there’s the azure Mediterranean, The green mountain slopes, the steep hills that drop into the ocean. The family, living in a wonderful old house amid cedar groves and olive trees, welcome them with open arms.
Jon, who until then always thought Naomi was unique, sees her cousins—and they all look like her. For him, it’s almost visual overkill.
He gets introduced to Naomi’s male cousin Ferro, a talented painter who is working on murals in a pilgrimage chapel.
They spend a few wonderful, dreamy weeks in that lovely setting before they have to return to New York and stark reality.

And I’m not going to tell you what happens next, because you are of course supposed to buy the book (and the first one, The Distant Shore, too!) if I’m ever going to get my Porsche.

But just so you know,  the last book in the the Stone Trilogy: Song Of The Storm, will pick off right where Under The Same Sun ends.

And now I’m going to have lunch and then get back to writing of the now (thanks to my publisher) untitled book four.

This was the fifth stop in Mariam’s Blog Hop celebrating the launch of her latest book, Under the Same Sun (Book II in the Stone Trilogy) which hit the Amazon.com bestseller list on its first day on sale!

There’s only a few left, so order yours soon and while you’re waiting you can go to our blog and click the link to read the first two chapters for free. Before you leave, you will want to write a comment below about this blog post for a chance to win one of three copies of Under the Same Sun (plus some pretty gosh, darn, yummy chocolate)! You can get additional chances by following Mariam at every stop on her hop and leaving comments after each post. And hey, while you’re here, why not follow this blog. You won’t regret it.

On Monday, 10/22, Mariam will be visiting Nita Beshear’s blog, where Nita will be reviewing Under the Same Sun. Join us there!

Check our blog for the full calendar and more details!