Theatre Review: The Bodyguard at the Adelphi Theatre, London

I was very excited about seeing The Bodyguard on stage in London; I went to a matinee performance of this show. Frank Farmer is played by Lloyd Owen who I had previously seen on TV and also in Closer at the Lyric back in the late 90s. It took me a while to get used to hearing him speak with an American accent but he played the reluctant, slightly awkward hero to perfection (and looked very gorgeous, especially in his dark blue suit!).

Gloria Onitiri, the alternate female lead was wonderful in the role of Rachel Marron, and the chemistry between the two leads was good.

Debbie Kurup who plays Nicki Marron, Rachels long-suffering sister sent shivers down my spine every time she sang. And Mark Letheren who plays the stalker in the show does so with such menace; there is one scene when he is alone on the stage and I was on the edge of my seat; I would go back to see this show for that scene alone.

Another highlight for me was hearing the sisters sing Saving All My Love For You.

The set was good with an interesting blend of video in the mix which allowed the action to take place in more locations. The costumes, especially for Rachel Marron, were very eye-catching, just as they should be for her character.

The show doesn't follow the movie to the letter, but it is well adapted and I would recommend it to anyone who likes songs with strong lyrics, gorgeous lead characters, sexy but very evil baddies, or simply a show you can sit and watch to escape from reality for a couple of hours.

Star rating: 4.5 out of 5. I want to see it again and I think it would be a 5 the second time.
(I saw a preview show in November and there were some minor sound glitches but I expect these have been ironed out by now.)

Seating tip: I called about tickets a few days before I saw The Bodyguard as the website said the performance was sold out but to call for availability, and I got seat B5 in the Dress Circle which is supposedly restricted viewing but if you are 5 ft 9 or taller the safety rail doesn't get in the way anyway (I'm 5 ft 10 and I had a brilliant view). From talking to the person next to me, I discovered I got a bit of a bargain with this seat.
Posted by Rebecca Emin at 09:06 No comments:

It gives me great pleasure to say that I have a story in Deck The Halls published by eMergent Publishing, and launching worldwide today.

Each of the stories was written to a prompt - a line from the Christmas carol Deck The Halls. I was given Tis the Season to be Jolly and from the deepest depths of my mind came a sci fi story. I don't usually write sci fi so I'd be interested to know what you think of it if you read it.

I am very proud to be published alongside some very talented authors. Many of these people I am also lucky enough to be able to consider friends.

This book would make a fantastic Christmas present for anyone who likes short stories. 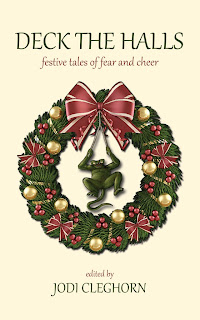