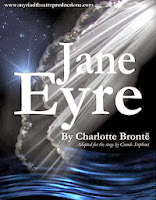 As part of the Thame Arts and Literature Festival, Myriad Productions visited Thame Players Theatre
with their production of Jane Eyre.

You may think that going to a tiny local theatre and paying £10 for a ticket would leave you disappointed, but all I can say about the production last night is WOW! First of all visiting the Thame Players Theatre is a pleasure in itself, and rather like going back in time as the drinks are cheap, the staff are all friendly and the theatre is tiny yet perfectly formed.

The cast in Jane Eyre consisted of four actors, three of them playing multiple parts and Joanna O'Connor as Jane Eyre being on stage for almost the entire time.  The set was minimal, yet so effective, but the acting itself was outstanding, both my friend and I were completely absorbed in the show.

All of the cast were fantastic but Maxwell Tyler deserves a mention for his incredible range of accents and the way he portrayed each of his multiple characters.

I will be keeping an eye on Myriad Productions and will definitely see another of their productions if I get a chance.