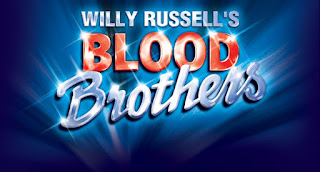 It's been almost five years since my previous review of Blood Brothers. This show is the one I have seen the most times and it never disappoints. This this time I introduced my three children & boyfriend to it as well, so it was interesting to hear their feedback too.

I was so excited when I looked at the cast list before we set off and discovered we were seeing Sean Jones and Mark Hutchinson as Mickey and Eddie, and once again they were fantastic. The way Sean Jones transforms himself from a sparkly-eyed, enthusiastic, excited 7 year old up through the teenage years until he's under pressure later on (no spoilers here!) is incredible.

In our show, Mrs Johnstone was played by Sarah Jane Buckley, Mrs Lyons was played by Amy-Jane Ollies and Linda by Alison Crawford. Unless I am mistaken the latter 2 were in these roles on top of their usual roles, which is always one of the things that amazes me about actors in shows like this - they are so versatile! And these 3 ladies were fantastic - if I hadn't seen the sign and heard the announcement I would have thought they were all in their "usual" roles. Sarah Jane Buckley was outstanding as Mrs J and I would happily pay to see her play that role again.

I also have to mention Daniel Taylor who pays Sammy so perfectly! He is fantastic in this role.

I was slightly worried about my youngest son (aged 10) being too young to see Blood Brothers but he was captivated by the show as were all five of us. My middle son asked, "Is the guy who played Eddie the same as on our CD?" which of course he is... as I have the 1995 London cast recording. I'm not sure anyone else could compare with Mark Hutchinson singing 'I'm Not Saying A Word'.

Another wonderful viewing of Blood Brothers. Catch this show on tour if you can, via this link.
Posted by Rebecca Emin at 14:47